Added to your bag

Rainbow Stories is a guide for parents that includes a printable (and digital) children's book to start important conversations with children — but first in our own minds.

There are 4 stories of children with different sexual orientations and gender identities written for children in a simple and spontaneous way, the way we should speak about "diversity".

In fact, maybe it's time to stop calling it "diversity" and if we really want to label it, just call it normalcy or reality: these stories are for parents who want to show their children the real world.

Rainbow Tales are the stories of three fictional characters, Alex (a bisexual boy's little brother), Mathieu (a boy with two moms), Nina (a transgender girl) and a real character, Ethan Caspani, a transgender guy who accepted to participate in the project to offer that extra connection with reality that I love (and consider necessary) in children's stories.

Rainbow Stories was born from a digital book created by five activists from various countries in Europe and Latin America during a Summer Hackathon organized by the Green European Foundation (GEF) in collaboration with the Federation of European Young Greens (FYEG) and with the financial support of the European Parliament.

Together they wrote and illustrated the original English version "Rainbow Tales" and my sister Cristiana Cerri Gambarelli, FYEG Project Manager, sent me the final result to read to Oliver and Emily.

A year later, when I started creating guides for parents that include a children's book (the first was about sex education), I remembered Rainbow Tales, which was still in some remote corner of my computer.

With the authors' permission, I took the children's book, rewrote some parts, added the story of Ethan Caspani (who kindly agreed to participate to offer a real character with real photos), wrote the guide for parents and translated everything into Italian and Spanish.

That's how Rainbow Tales was born.

All proceeds go to support the LGBTQ + community

That's why all the parts involved in this project agreed that ALL proceeds from Rainbow Tales will go to ILGA Europe, an organisation that works towards equality and human rights of the LGBTQ+ community.

This is not a decision I took lightly, because there's a lot of work involved for me, BUT it's a decision that feels right. My kind of decisions.

An excerpt from the introduction to the guide for parents

«Even in the 21st century, homosexual and transgender people are often frowned upon, insulted and even abused in many countries around the world. We don't need to go far: in Italy homosexual couples who expose themselves on social media receive insults and death threats (!); homosexual people continue to be brutally beaten up by strangers; parish priests organise rosaries to pray for the conversion of homosexuals.

This is not educating with respect, towards peace nor long term».

What you find inside

Rainbow Tales is a guide for parents that includes a printable children's book (that you can also read digitally). When you buy it you will find:

I can't wait for Rainbow Tales to get into your homes and sow seeds in your minds. 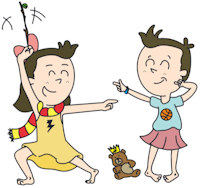 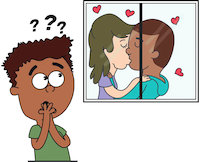 What age is the printable book for?

It's never too early to raise awareness of "diversity" and normalise our conversations and thoughts about who's "different" from us.

Tolerance and respect begin with us parents: the sooner we break down the taboos in our minds, the sooner we can normalise conversations that should already be normal.

I don't think books have ages, so I won't give this book an age: what I can tell you is that I read it to my kids when Oliver was 5 and Emily was 3.

What do I find when I buy it?
Is there a printed version of the book?

La Tela is not a publishing house and this children's book (although I think it's essential on today's market) can only exist if it's sustainable for me.

This is why for now there is only the printable or digital version, but we'd love to explore printing options in the future! If you have suggestions, please do write me at carlotta@lateladicarlotta.com 🤞

Got more questions?
Write us at ciao@latela.com