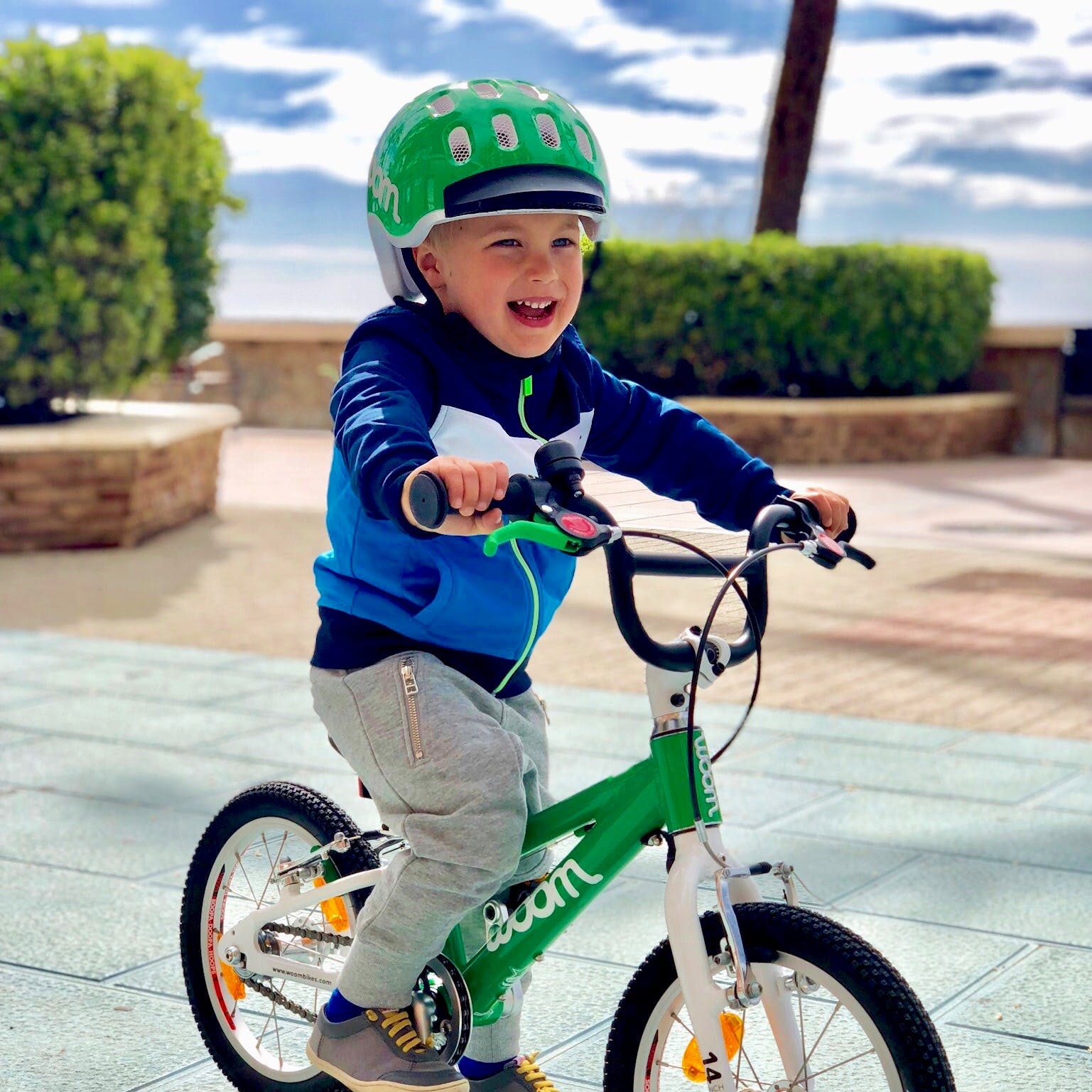 I had planned this review for mid-April, but I can’t possibly wait until then to tell you about Oliver’s new “big-boy bike”.

If you follow us on Instagram or Facebook, you’ll probably know that Oliver’s been asking for a big-boy bike for months, and we finally found the perfect one: a light 14” bike by an Austrian company called woom, who claim to make the best kids bikes on the market.

After seeing Oliver use it for two weeks day in and day out, I’m inclined to agree.

The light weight was one of our main requirements

Oliver’s an independent soul, he never ever lets us carry his balance bike, not even uphill, not even up a thousand stairs we once encountered on our way back home. His new bike needed to be as light as possible.

The woom 2 only weighs 5,3kg, which makes it lighter than the other two brands we were considering.

And to prove you that I’m not exaggerating, here’s a picture of Oliver in the very first ten minutes since we got out the house with his new bike for the first time: he wanted to carry it downhill himself, and he did (which, as you can see in the background, we found very amusing ;-).

We wanted Oliver to switch to a “real” pedal bike, the kind of bike he will be riding his whole life. I intuitively never liked the concept of coaster brakes, because in my mind coaster braking:

I was happy to find out that Woom creators thought exactly the same, and not only did they put real brakes on their kids bikes, they even color coded them so children don’t mix them up. It’s so much easier for the kid to quickly react to, “Use the green brake” than to “Use the right/rear brake”.

Also, as you can see in the picture, the short-reach lever is easy to reach even for Oliver’s 3-year-old hands, and it’s quite soft so he doesn’t need to apply much force to brake.

How could the steering limiter not be on my priority list?

The only times Oliver fell on his balance bike—he’s a very cautious boy, but after a year of balance biking he did get quite cocky—was when he lost control of it by overturning the handlebars. Duh!

The woom 2 has a steering limiter which prevents exactly that from happening, and I’m pretty sure it will save us a scare or two! When I saw this feature on this bike, I had a “lightbulb” kind of moment: of course a kids bike needs a steering limiter!

No tools needed to adjust the seat height (thank you, Woom!)

Oliver’s balance bike required a tool to raise the seat, which made it cumbersome to adjust on the road.

Like you’d expect, the woom 2 has a quick release clamp to adjust the height, which came in handy when super-duper Oliver asked us to raise the seat, not one, not two, but three (!) times just on his first ride!

Every detail is beautifully designed and attentively thought out

And when I say everything, I mean ev-e-ry-thing!

• The aluminum frame has a low center of gravity which means that the bike tends to stay upright, so the kid feels more secure when riding.

• The seat has protective fabric on the sides so it doesn’t scratch when parked against a wall or—as we’re talking about toddlers here—on the ground.

• The integrated chainring guard protects trousers from getting dirty and jammed (and it looks much more stylish than other brands).

• The tires are designed for optimal grip, which is particularly important with children—you know that look in their eyes when they think, “oh, look at that puddle/weird looking ground, I’ll bike straight through it!”.

• It comes all perfectly adjusted by Woom technicians. When you get your Woom 2, all you need to do is plug in the handlebar with a single screw, attach the pedals, and you’re good to go. It’s that easy!

The helmet is a must!

The woom helmet is a piece of art in itself. The buckle is magnetic so Oliver can actually close it without our help; the special rubbery frontal bumper serves both as a visor from sun and rain, as well as face protection; and the big logo on the side is actually made of reflective film so it enhances visibility in the dark (here in the Costa del Sol we might never need it, but how cool is it that Woom thought about that?).

Oh, and when you get it, take a look inside: there’s a special message for your kid that you’ll love! ;-)

What would I change about this bike?

This bike is perfect. It’s perfectly thought out, light and steady, adorable, and incredibly comfortable judging by the fact that Oliver never wants to get off it. There’s nothing (zero, zilch!) I would change—I know, that’s a first!

Well, maybe there is one thing I’d like to change. I wish I had found Woom earlier and got Oliver the woom 1—their balance bike which has a rear brake. Braking is by far the thing that Oliver is struggling getting used to the most: he can easily brake when we remind him, but instinctively he still puts his feet down. Had he learnt with the Woom 1, braking would now be second nature.

Oliver's adventures on the road

I decided to have some fun with this thing called technology, and made a video of Oliver’s first days on his bike (including his very first attempt!)… he left us all speechless! Make sure the volume is on ;-)

We’ve been proud ambassadors of woom for over two years. We chose Woom after extensive online research, I reached out to them and they were happy to collaborate. Thousands of km later, I still truly, deeply believe that woom makes the best kid bikes BY FAR on the market, worldwide. That’s why I keep writing about it.

🌸 The links you find in this article are affiliated: if you use them to buy your Woom bike (by the way, now they send directly to Spain, too!), you pay the same price, but I gain a small commission that helps me keep my blog alive. Thank you!

These are the woom products we’ve tried so far and that I can recommend to you:

This is a sponsored post. I reached out to Woom because we fell in love with their bikes, and they were so kind as to send Oliver the woom 2 and Emily the woom 1. We’ve been partnering since and I couldn’t love their products more.

I'm a big WOOM banner waver. My grandson will be 3 July 1st. He's been riding the Woom 2 since December. We do long city rides (easy for a kid in Austin) and he likes to go to the bike park and one of two pump tracks — so he's kind of an aggressive rider! *I* loved the steering limiter but after about 2 days he was frustrated with it and I took it off. The kick stand is a good thought but it drags on some steeper drops and can cause the bike to fishtail to the side in the air. No crashes— some close calls, so we took it off yesterday.
Helmets, absolutely, but I think the best safety equipment in our case is padded gloves. The cheap elbow pad, knee pad, half glove set that sell for $10 has worked fine. The gloves are tear savers! Long pants on the dirt are good enough but he wears the pads for off-street concrete park riding. (I couldn't find a good safety vest so his grandmother made several.)
The Woom2 is truly a great 1st bike but they don't have any plans on branching out with a more BMXy type 16" bike so I think we'll probably look at the Spawn Yoji 16 for a next bike.
I enjoyed reading your review.
I have videos of grandson riding
@russell_dallas on Twitter

Oh wow, your grandson started early! Thanks for the suggestion for the BMX bike, I think we are sticking with Woom for the foreseeable future, but it’s always good to have options! I’ll check out the videos of your grandson with Oliver (for some inspiration ;-)! Thanks for your comment 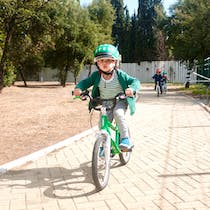 Mums, dads & kids
How biking gives Oliver confidence in every aspect of his life
Read post 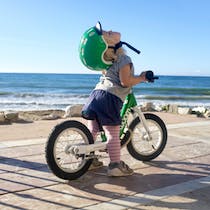 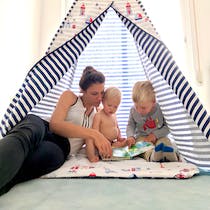 Mums, dads & kids
Review of our kids teepee by Matuu
Read post
I know! I don't want it to be over yet either.
Surprise me with a random post
Home Courses Shop Feed Podcast About